Ozone – Is it Good or Bad?
The ordinary man on the street has probably learned through the media and popular misinformation that ozone is something toxic in the air. It is supposed to be a real health hazard and major pollutant to be avoided. In fact, when most people think of air  pollution, they often think of ozone levels and relate the two directly. Therefore, just theconcept of ozone as a purifying agent would be an apparent contradiction in terms. But the contradiction is only ‘apparent’ for there is in practice, no safer, effective andmore convenient oxidizing agent (acting alone) to purify polluted air, than this verynatural element! Moreover, it is in part, nature’s way of cleaning the air! As the saying goes, ‘fire can kill, fire can also help’ depending on how you use it. Just as it does naturally outdoors, ozone does have a great potential for improving indoor air quality under the right conditions.

The Nature’s Way of Cleaning the Environment
Ozone is a molecule composed of three atoms of oxygen. Pure ozone is produced naturally and has a distinctly pale blue colour when it is isolated as a crystalline solid or liquid at very low temperatures. When it is generated commercially from the air, a colourless gas is produced. At low concentrations, it has a very distinct sweet and pleasant odour – which has at times been referred to as the smell of ‘fresh, clean air’ as ‘in the mountains’ and ‘near waterfalls’, or ‘after a thunderstorm or lightning’. Natural ozone concentration at ground level can vary between 0.01 – 0.05 ppm.
Ozoneis the second most powerful oxidizing agent in the world. It is second only to fluorine which itself finds very limited use in practice, since the latter is a rare and expensive halogen gas that has many devastating side effects and complications for routine humanapplications. Ozone works at killing bacteria more than 1,000 times faster than chlorine.

Some History
Ozone was discovered in 1840 by a German chemist but its utilization in industrial situations has a rather long and impressive history. This was way before the current environment concerns put it on the scientific center stage. The most common use of ozone to date is probably in the treatment of water for drinking. In 1906, a group of scientists and doctors studied the ozonation system at the Outshoorn plant in Holland and later constructed a plant in Nice, France capable of handling 19,000 cubic meters per day, using ozonation for disinfection. For this reason, Nice is considered to be ‘the birthplace’ of ozonation for drinking water treatment. Today that has become a widespread practice in many parts of the world.
Ozone was first used on meats in 1909 in Cologne, France – ironically, by German scientists. The US Department of Agriculture was slow to acknowledge and approve itsuse in foods but after many decades, they have now ‘seen the light’! This has really beenlong in coming since an application of ozone use was first published in the United Statesin 1885. It is now widely used as an oxidizing, deodorizing, sterilizing and bleaching agent. As powerful an oxidizing and sterilizing agent as ozone is, the remarkable property is that it decomposes to a non-toxic, environmentally safe material. This is in clear contrast to chlorine which produces hypochlorous and hydrochloric acid. Even in its widespread use in water, chlorine has complications of odour, taste, allergies and irritation for sensitive individuals.
In considering the history of ozone, perhaps it is appropriate to include a reference to a series of studies published at the height of the Cold War in the Journal Priroda (1976) where the Department of Health in Russia established some important points concerningthe use of ozone in closed indoor environments. They found that normal air loses its basic ‘freshness’ quality when it was drawn into air conditioning and heating systems, with aloss of as much as 90% of its ozone and ion levels. This was demonstrated to cause symptoms for building occupants who complained of headaches, weakness and a general poor feeling – commonly referred to as ‘sick building syndrome’. However, after five months of testing, with both a test group and a control group, the subsequent exposure to15ppb (parts per billion, a level not so atypical of normal air) of ozone, restored a feeling of well being. Moreover, at these levels of exposure, they were able to observe increase immune potential, higher oxygen content in the blood, improved blood pressure readings, and the reduction of many stress characteristics associated with working in modern officeenvironments. Studies by the Institute of Child and Adolescent Hygiene showed that byraising the ozone levels in classrooms to 15ppb, up to 69% of the students decreased the time required to complete concentration tasks. They also noted favourable changes in respiration, mental reserve capacities and general state of physical and mental health.
Ozone Power
In the area of public health, ozone technology has been a potential source fir reducing therole of infection, both in the home and in healthcare facilities. Ozone is a powerful, broad-spectrum antimicrobial agent that has been found to be effective against bacteria,fungi, viruses, protozoa, bacterial and fungal spores. Potential applications for ozone inthe food industry include:- increasing yield of certain crops, protecting raw agriculturalcommodities during storage and transit, sanitizing packaging materials for storage, andadding to water for washing food in the preliminary and final stages of distribution. As of June 2001, ozone has gained FDA approval as a sanitizer not only for food contactsurfaces but also for direct application on food. Currently, 90% of Fortune 500companies in the food industry are already using ozone in some of their applications.
Safety Limits of Ozone
The concern of overdose of ozone is more related to exposure in the air and less in thewater, depending on applications. Various reputable agencies worldwide have published recommended safety levels in the air which can be referred.

Myth #1 All air cleaners sold for residential use produce hazardous ozone and are therefore inherently dangerous
All reputable bodies including the US EPA, FDA, OSHA, ASHRAE and ACGIH have acknowledged standards for ozone accumulation and exposure levels. As long as manufacturers adhere to the suggested conservative standards of exposure, the probabilityof developing health risks should be very low.

Myth #2 Low-level altitude pollution or smog is due to ozone
It is true that wherever smog levels are high, so are the measured ozone levels. And whileozone is easy to measure, hydrocarbons are not. In addition, ozone is always present inlevels consistent with the hydrocarbon (pollution) level, therefore the commonassumption is perpetuated that ozone is the culprit. But it’s just not so. Ozone formsnaturally when sunlight reacts with man-made hydrocarbons in the air (generated byautomobile exhaust and smokestack emissions, for example). Hence, the morehydrocarbons there are, the more ozone is produced. Moreover, it is the ozone produced naturally outdoors that is actually nature’s secret for helping to break down those harmful hydrocarbons and other pollutants.
Myth #3 Ozone is the toxic agent in polluted air
Many people believe that the offensive odors, burning eyes and aggravated respiratory problems associated with air pollution, are all due to high levels of ozone in common polluted air. The fact is that they mistake hydrocarbons, oxides of carbon, sulfur andnitrogen, halogenated by-products, lead and other sulfur compounds – all these irritantsand more – for a single scapegoat: ozone. These other pollutants do indeed cause eye, nose and throat irritations. In their absence, the irritating effect of ozone at the low concentration levels is a far cry from what is commonly assumed.
Myth #4 Ozone destroys the sense of smell
Ozone is an effective deodorizer because, as an effective oxidizing agent, it eliminatesodour, especially the organic based odour such as are commonly found in the kitchenwhen cooking. The effect is not in the nose or the brain where the true sense of smell is experienced. The effect is rather to chemically change the noxious chemicals byoxidizing molecules of carbon, hydrogen, sulfur and nitrogen, to odour-free moleculeslike carbon dioxide and water. Ozone does not mask the odour, it changes or neutralizesit. That’s the ideal answer.

Ten Advantages of Ozone Technology
1. One of the biggest advantages of ozone may be its relatively low cost incomparison to other technologies.
2. Ozone will neutralize virtually all organic odour, specifically those that containcarbon as their base element.
3. Ozone is also less corrosive to equipment than most chemicals currently beingused, such as chlorine.
4. Ozone generators clean the air and may reduce the risk of microbiological infections.
5. Applications of ozone are generally quick and easy as units are portable and only require a minimal amount of time to treat the average room.
6. Ozone has been found to be an excellent disinfectant, especially for the treatmentof water and waste water.
7. Ozone has been found to be an effective broad-spectrum antimicrobial but because it can be used in gaseous form, it can give a complete coverage of all surfaces.
8. Ozone technology can be applied with very little if any manpower.
9. An important advantage of ozone use in food processing is that the product canstill be called organic.
10.Ozone kills bacteria within a few seconds by a process known as cell lysing. Because of this, microorganisms cannot develop ozone resistant strains, thus eliminating the need to change biocides periodically.

Reference: Some information has been extracted from the book ‘Fresh Air For Life’ co-authored by Dr Allan Somersall and Dr James Marsden. More reference can also be obtained from ‘The Story of Ozone – Seventh Edition’, the International Ozone Association website, etc.

Thank you for your subscription. We will send you all the tips on how to use our product and all promotional material to you shortly. Thanks and have a nice day. 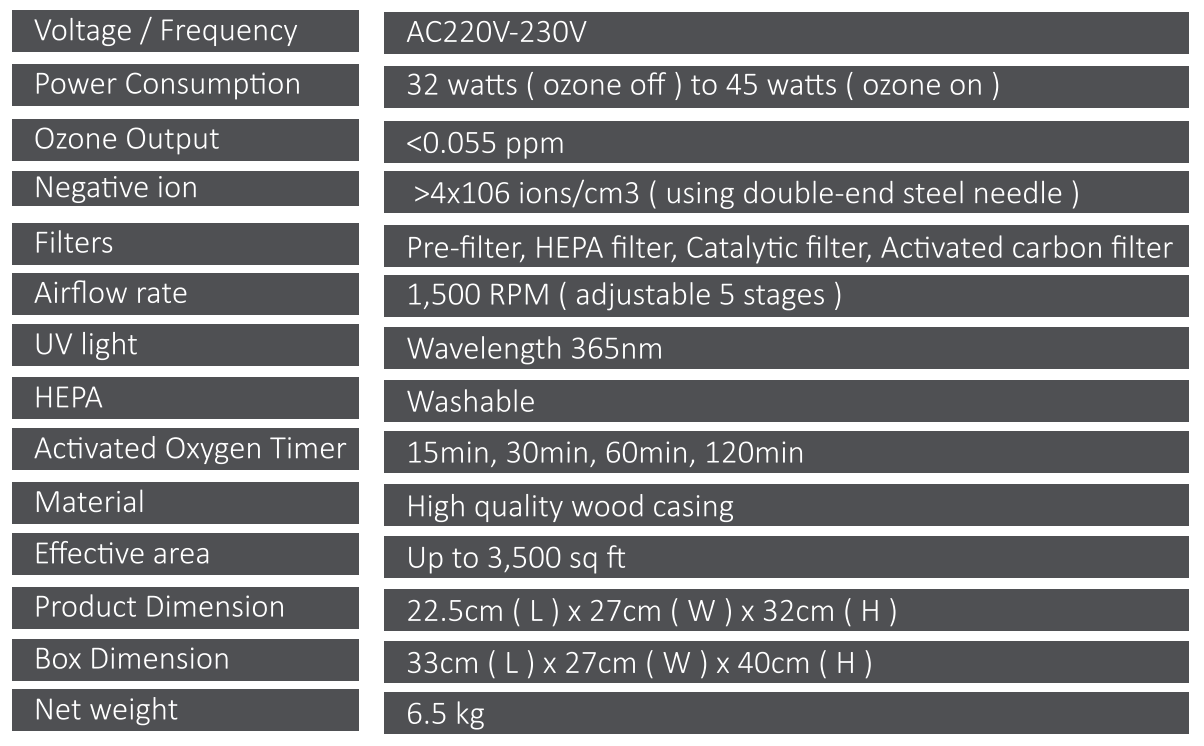